Grimvalor is a hack and slash platformer developed by Finnish studio Direlight Games. The player controls a nameless protagonist who seeks to destroy the demon-like monsters that have taken over the human realm, ruled by King Valor. The game is light on story, instead focusing on combat and exploration. Grimvalor’s environments and art design shine through in an otherwise lackluster game.

Grimvalor is clearly inspired by the Dark Souls series and contains elements of the Metroidvania genre. Like many other Souls-likes that have come out in the last decade, the game features its own version of the Estus Flask, a consumable item with limited uses that can be used to recover health. The gameplay revolves around traversing from rest-point to rest-point, battling gauntlets of minor enemies who respawn after the player dies or utilizes a rest-point, as well as major, gate-keeping enemies who no longer spawn once defeated, called “Guardians.” Enemies drop “soul shards” when defeated, which are collected by the player to level up.

This is the standard in most Souls-like games, where the player will generally drop their collected “souls” when they die. The player is then given one chance to recover their souls on the next life; if they die again while trying to get their souls back, those souls are lost forever, meaning that essentially all the progress the player made in their previous run is wasted. This can be very frustrating but is a well-conceived system that creates a great deal of tension, punishing the player for dying while giving them the opportunity to redeem themselves and get a little farther on the next run. And when you finally make it to the next rest point, souls in hand, and level up your character, you feel that you have been rewarded for your efforts and are immensely relieved for the chance to rest.

But this isn’t the system at work in Grimvalor. The player does not lose their collected “soul shards” upon death. Instead, whenever you collect a soul shard, it is permanently in your inventory until you spend it on an item or a level-up. Though this lessens the chance of the player feeling frustrated, it cheapens the experience of self-improvement and makes any victories feel flat. To make things worse, it’s far too easy to run past or away from conflict if things go south or if you just don’t feel like fighting the enemies. Often, enemies guard weapons and other items, but I soon found myself slipping past them and picking up the item they were guarding, avoiding conflict entirely. Even when I happened to die while trying to escape, I would still have the item in my inventory, and since there is no punishment for dying, there was no reason to go back and fight the enemies that had killed me.

While I don’t want to say that Direlight Games should have followed the Dark Souls format to a T, they needed to create a system that made death a little more meaningful than it was. Admittedly, it is always frustrating to die and lose progress in a game, but it’s even more frustrating when a game rewards you for something you don’t earn.

Grimvalor was developed for both mobile gaming and the Nintendo Switch, which means that gameplay is limited to something that can work on both a touch screen and the standard console set-up of controller and screen. This leads to simple, sometimes limiting controls.

I played the game on Switch, and while I have nothing against a simple control scheme, the ambiguity of multi-functional buttons meant that I often performed actions that I didn’t intend. For example, the “Y” button functions as both the attack and general interaction inputs, meaning that sometimes you might pick up items at your feet when you instead meant to attack the enemy in front of you.

Most of the gameplay of Grimvalor consists of timing a dodge just before an enemy attacks you and then attacking them from behind, but because the same button you press to dodge also functions as a “dash” when the game thinks no enemies are attacking you, sometimes you will get a dash when you mean to dodge and vice versa.

Although the game has elements of the Metroidvania genre, most of what I love about the genre (an interconnected world with gameplay that flows naturally from one area to another; recontextualization of previously visited areas through power-ups and other dynamic developments) is pretty much absent in Grimvalor. This absence is not necessarily a bad thing, but Grimvalor is not “interconnected” – instead, the game is linear, with a five-act structure and a clear left-to-right progression.

There is little opportunity for deep exploration in the game, but there are extra paths that branch off from the main path which reward you with non-essential but useful upgrades like armor, weapons, and special trinkets. It’s good that the game doesn’t require you to backtrack – the linearity and constant forward motion is a good thing, especially in a hack and slash game. But there are issues that make the game’s structure a little clumsy, like unclear map design (it’s difficult to tell when one region ends and another begins), long loading times, and the fact that Grimvalor relies on fast-travel to tie its sprawl together.

When you load up a new game, the first thing you see is a “new quest,” to explore the “Abandoned Archives.” There is no context or backstory for this “quest.” In fact, all quests in the game are superfluous. The overall game structure and map design pushes you constantly and naturally from left to right. This was a good design choice and I think it would have been better to get rid of quests entirely. They don’t give the player any new information that they would need to progress through the game, nor do they really point the player toward any particular location.

There doesn’t seem to be a clear backstory that explains how the kingdom was overrun with demons (or how the people of the kingdom started turning into demons?). A vague backstory isn’t always a bad choice, but the events of the game world are just not ever given much detail. There are short book passages to discover along your journey, but they are insubstantial and don’t do much to clear up the story of King Valor and his kingdom.

Most of the game is spent repairing “a Nexus,” which seems to be a magical area that exists in multiple places at once. Practically, the Nexus allows you to quickly travel between areas, but on a narrative level it is unclear why the player should be motivated to repair the Nexus or what the Nexus will do once it is repaired. Indeed, the motivations of the main character are unclear and never explored. You play as a nameless warrior with no backstory who, despite appearing to be an average human, somehow has combat prowess and powers superior to every other inhabitant in the kingdom.

There were a few other buggy audio issues, like music cues that didn’t seem to trigger appropriately and a sound clip of the wind that cut out noticeably before repeating, instead of cycling seamlessly. Also, enemies sometimes randomly fell to their death.

Combat is consistently repetitive and consists of holding down the attack button until there comes a need to dodge, though sometimes it was enjoyable to react to enemy attacks and learn their timings. In general, combat is a bit too easy, as dodging gives the player a generous amount of invulnerability and is fairly easy to time, but when the game focuses on giving its enemies interesting attack patterns, as it does in some boss battles, it can be surprisingly challenging and fun. Most of the enemy attack animations are flashy and stylish, but boss battles in general are very hit or miss. Some feature constant spawning of lesser enemies; these battles quickly become cluttered and annoying. Other bosses feature frustrating elements like long invulnerability times that essentially make the player wait in place.

The best things about Grimvalor are its environments and art design. The dark fantasy setting of the game lends itself well to interesting, varied areas that are fun to explore, at least visually, and the character design in general is pretty excellent and creative, albeit the player character’s design is a little bland.

Overall, the game can be fun to play if you let it, but it was difficult for me to enjoy most of the time. I would recommend the game if you are into hack and slash games and don’t care much for story, and if you don’t mind the control scheme and gameplay problems that I outlined above.

The game also features an arachnophobia mode, which replaces spider-like enemy designs. I’m not sure how the alternative designs look because I didn’t play with arachnophobia mode on, but if you are afraid of spiders, you need have no fear of playing Grimvalor.

The game is $12.99 on the Nintendo eShop, but it’s also available on the App Store and Google Play (I think for less). Perhaps the game is more impressive as a mobile title, but as a console game it comes up a little short. 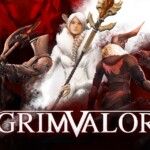 Grimvalor is a hack and slash with dark, beautiful environments and a few major game design flaws.