When A44’s Ashen was initially proposed to me I was apprehensive to start playing. I had briefly played From Software’s Dark Souls some years earlier and hadn’t found myself particularly fond of that sort of game sub-genre. I tend to lean towards more story focused games, with combat that is intensive but ultimately easier to manage. So, it took some convincing from a friend (an eager Souls fan), on top of a cool trailer, and the benefit of the Xbox game pass for me to finally press ‘play’. Within the hour I was almost ready to chuck my controller.

The game starts with the death of the Great Ashen, creator of all light and life. The Guardian of the Ashen, Bataran tasks you with finding the reincarnation of the old Ashen and restoring the light to the world. Your first quest is to recover his hammer and spark. After finally managing to defeat the first few enemies, the world opens up to exploration. And it is a wide, beautiful world filled with characters that will both aid and hinder you as fight your way to uncover the mysteries of the land and race to find the fledgling Ashen.

Large, open worlds can often struggle with its own grandeur, where there is too much to see and do, and not enough story to fill it all in. A44 has, in my opinion, done a wonderful job circumventing that hurdle. The progression of the story is tied in beautifully with the game’s exploration. You are fed bits and pieces of lore through character interactions and reading object descriptions, though occasionally your companions will sometimes expand upon these findings with their own anecdotes. And so, piece by tantalizing piece, you slowly unveil the happenings of the Ashen universe by traversing the barren, grey wasteland of the Eye of the Needle, exploring the colorful Bronzed Mire, or daring to delve deep beneath the earth at the Seat of the Matriarch. Yet never do you feel like you have to scrounge for information or forage for crafting materials. The quests you need to complete lead you to the new areas where better gear and more materials can be found. With every quest complete your character ‘levels up’ along with their home base of Vagrant’s Rest. With every returning session, it becomes “What can I do next? What secret will I find?”

Ashen is undoubtedly a beautiful, polished game, with intriguing lore and an eclectic group of charming characters that you will meet during your adventures throughout the world. As previously mentioned it is very Souls-like in its challenging combat system, based heavily on dodging and stamina management. Though in contrast, there is no magic or alternative styles of play, besides shield and one-handed weapon or two-handed. You are given increasingly powerful spears as you progress that serve as a useful long-range alternative. However, the absence of varying weapons and combat system isn’t felt too much. The game opens up better and better gear along with new crafting with every new area uncovered and quest completed. So, you’re never left wanting for too long for different items to try out. In addition, the combat feels much more streamlined. Strategy becomes more focused, allowing for a greater mastery of the commands and a smoother learning curve for new players.

In the 20+ hours I played Ashen on my Xbox One, I hadn’t encountered a single instance where the game shut down and the only time I noticed a significant lag or loss of frames was when I pushed the sprinting mechanics to their limits too quickly and ran past too many spawned enemies without stopping to fight them. Otherwise, the game runs very smoothly, even on an older console. Ashen also proves to be a highly polished product; during the entire game I encountered only two bugs. The first, I tried attacking an enemy from behind and he was temporally impervious to any damage until I disengaged. The second, I’m not completely sure is a bug or simply a feature I struggle with. When in combat the player can press the right stick to lock onto enemies. During more intensive fights with multiple enemies crowding around, I would lock onto one enemy and when launching an attack would suddenly strike another. Of course, despite the frustration it was an easy enough work around to disengage and avoid the target lock mechanic when there were too many enemies.

The game can be played with co-op, though this is an optional feature as the game can be played solo. However, it took me and embarrassingly long amount of time to realize the ‘guest’ player takes on the role and guise of one of the companion NPC’s. The character is usually decided by whatever quest you have selected when you load into a new area. For example, if I were to track Vorsa’s (one of the few friendly characters you’ll meet) quest line in the journey menu my companion would appear as her. If I were to choose Flokir’s, they would appear as Flokir, and so on and so forth.  It’s a bit unfortunate that your co-op partner’s avatar doesn’t appear as itself but, having played this game side by side with my friend, I have found that traversing the world of Ashen would feel a bit more desolate and emptier without them. There’s also the added benefit of having your companion pick you up for the 25th time because you’ve forgotten dodging was a thing.

Being an action RPG Ashen has some fairly daunting competition. But the developers at A44 managed a delightful blend of familiarity and uniqueness. The stamina-based combat is challenging without being overly complicated and bogged down. The world is beautiful and interesting. And while story is similar to other ‘save the world’ tales, the universe and character are well written to stand on their own as a distinctive experience. It truly becomes a delight to see the progression the town makes as you return after every successful mission. There are many hidden details throughout the world that pulls you onwards to new areas, but also to pause and admire the view. Small things like your character’s hair swaying in the breeze, to larger things like a giant bicorn whale flying right overhead as you arrive to a new area. Overall Ashen is a solid game, that despite my reluctance became a true pleasure to play. 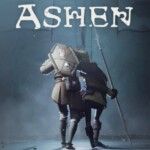