It’s a cold and rainy January day in downtown Sacramento, California. I’ve arrived in front of the Convention Center Complex, shoes slightly soaked from the short walk from the public parking lot I have miraculously managed to find a spot in. It’s nearing 11:00 am, and I easily follow the crowd of eager convention-goers. Some are dressed up in impressive, elaborate costumes and some, like me, are simply dressed in normal clothes to combat the terrible weather. I catch sight of some New California Republic troopers (from Obsidian Entertainment’s Fallout: New Vegas) already posing for pictures before even entering the building, and squeeze past Daenerys Targaryen as I rush to escape the wind and rain.

It’s only my third convention that I’ve attended so far in total, and I have to take a moment to get my bearings. Thankfully, I meet up with the Creative Director of LevelUp who guides me to where I need to grab my badge (it’s in the next building over) and then return back to the main building to enter the convention proper. As a relative newcomer to the convention scene, I’m overwhelmed by the sheer volume of props, costumes, and energy of the event. Every time I turn around there seems to be something new to see. Where do I even begin? Where do I look first? Whose picture do I dare to ask? I choose to employ the same strategy I used at the Alamo City Comic Con: a meandering tour of the center, getting my bearings, picking interesting venues to come back and check out later. I nod at Mary Poppins and Bert, am pleasantly surprised to see Jester and Nott from Critical Roll, and can’t resist joining in with everyone and snapping a picture of those valiant NCR troopers. 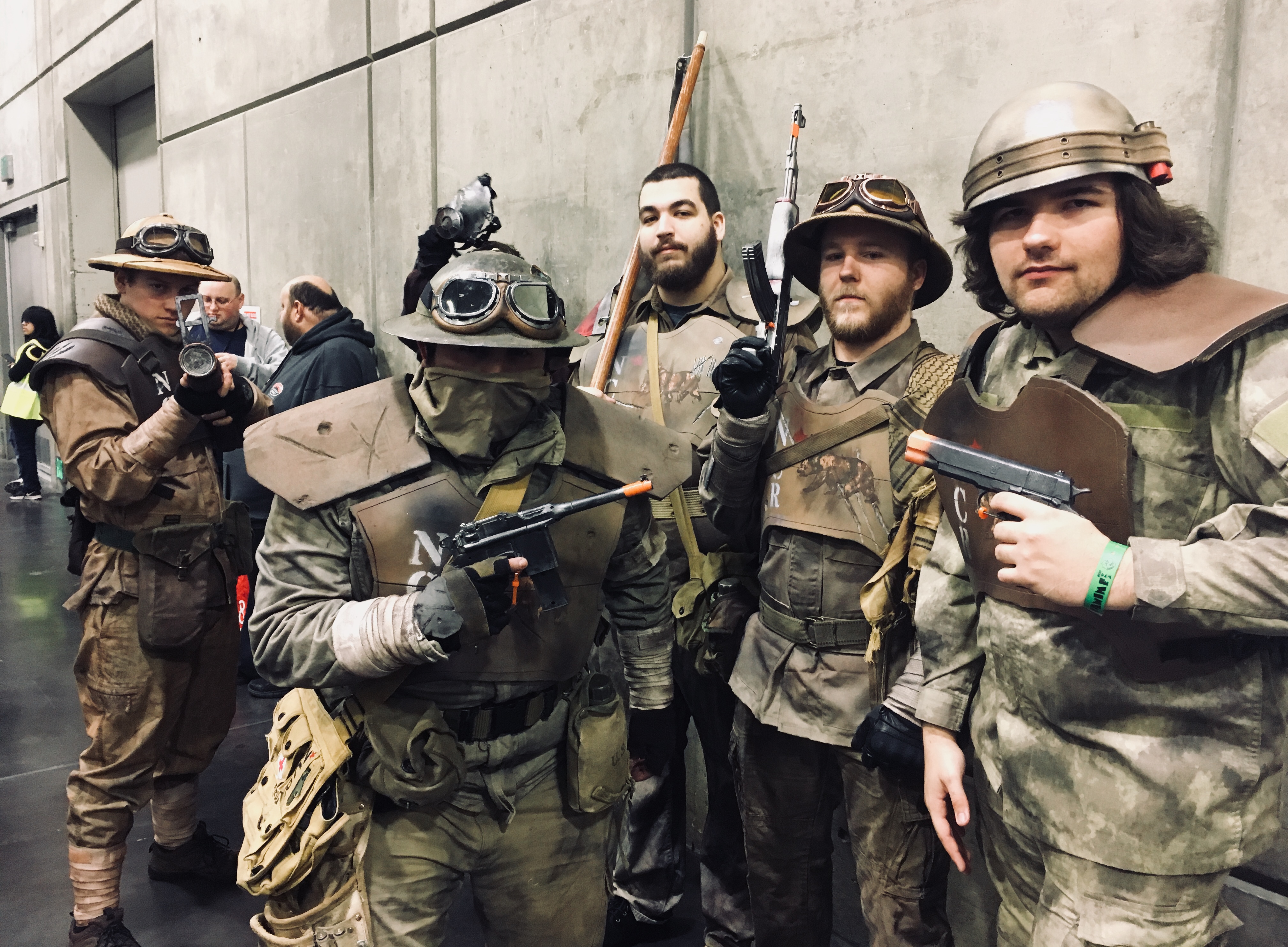 I finish my first round of the event and decide I’m starting to get into the groove of the event. My phone is out, ready to take even more pictures as I dive back into the corridors of fan creations, props galore, and retro games. My first stop is a neat little booth I caught sight of near the entrance of main hall called FuchsiaGorilla. With a name like that, how can I resist a look? And it definitely was worth the stop. The table is covered with these adorable knitted creatures, ranging from squids to dragons, to little knitted soot sprites. I learn from the owner, Lela Borgeson, that she’s come all the way from Portland, Oregon to promote their Etsy shop where they sell more of these cute balls of yarns, as well as custom orders. They’re not the only ones who’ve traveled to sell their wares in Sacramento. Marie Belongie, a fourth-generation seamstress, and her husband Stephan from Celtic Dragon Leather, have also traveled, this time from Redding, California, to sell custom leather works, ranging from small pouches to full on leather tunics. I leave them both happily surrounded by inquiring customers. 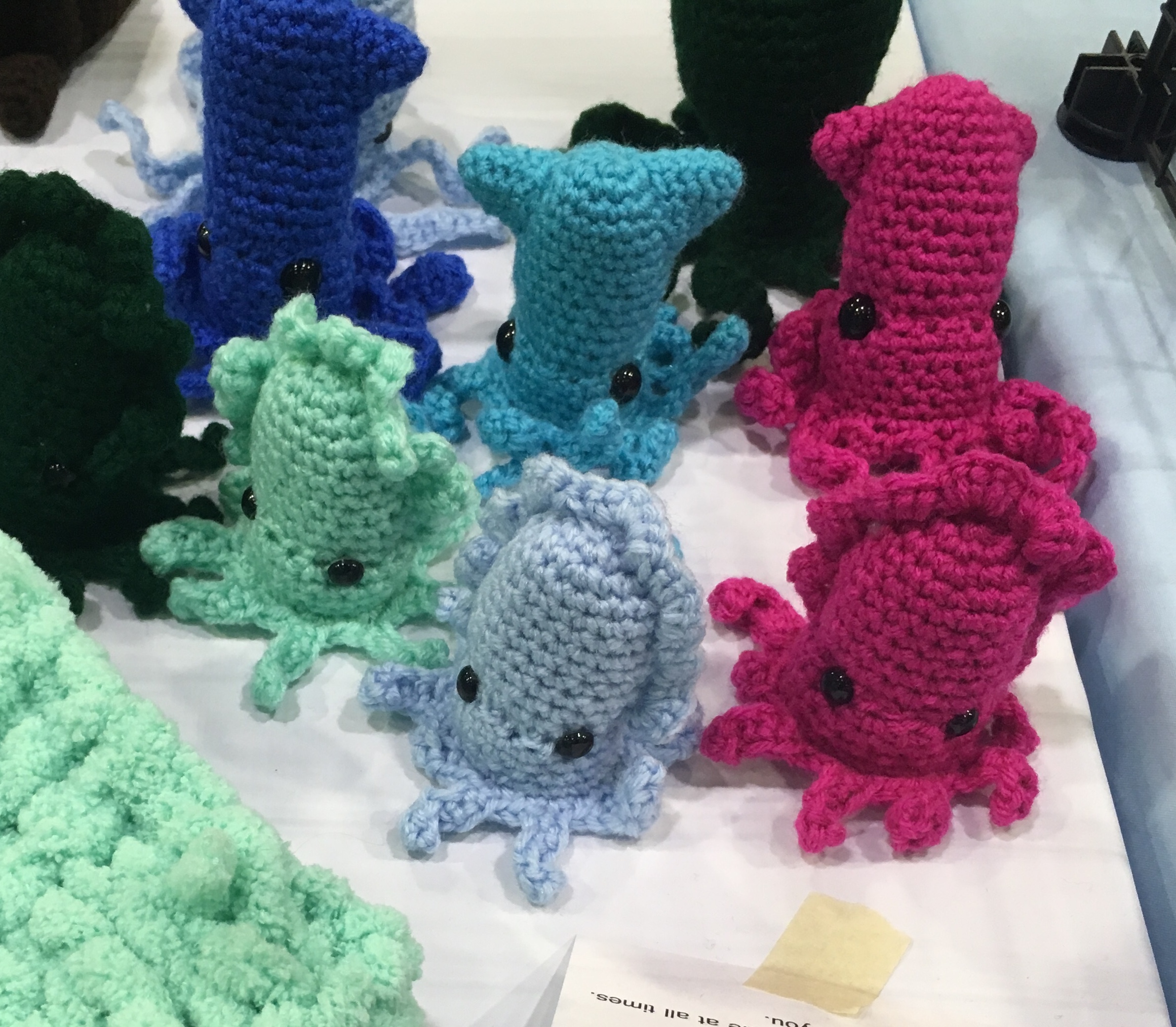 SacAnime being an anime convention, it makes sense that there would be some hint of Japanese influence in some of the booths. In fact, one of the larger booths in the back is almost entirely dedicated to Japanese goods and treats. I’m particularly struck by the enormous Hello Panda box. There are some good deals on the table, and I can’t help but think they are well situated with so many hungry con-goers in search of a quick snack. Some of the other booths further down offer ‘mystery boxes’ for purchase and I’m briefly reminded in a way of the Japanese fukubukuro or “lucky bag”. Of course, I doubt the items at the convention are discounted as substantially, but I sort of like the concept.

After nearly two hours of zigzagging across the convention floor, it’s 1:00pm and I’m more than ready for lunch. We leave the convention center to avoid the expensive event food and eventually decide on a homely looking deli shop just across the street. Many other cosplayers and attendees have the same idea and, while waiting in line, I ask a lovely Mary Poppins and a fierce Nord warrior if they’d mind terribly if I could snap their picture. They graciously accept. After devouring my sandwich, it’s time to go back in. 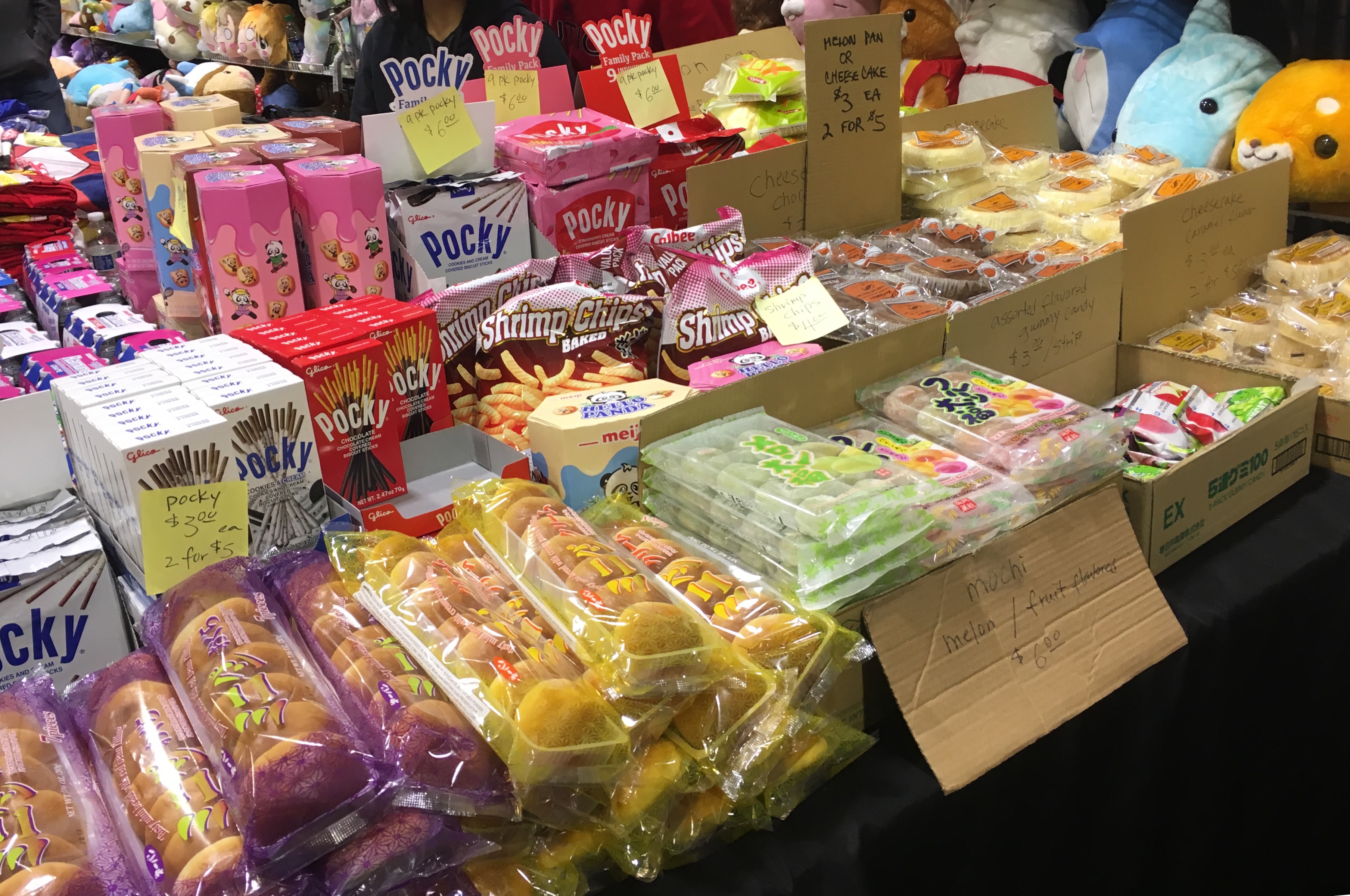 This time we take to the second floor in preparation for the Diversity in Gaming and Podcast panel. When we arrive, surprisingly, there’s barely anyone. Slightly confused, but determined regardless, we take a seat. Five minutes pass, then ten, then fifteen. A couple other attendees had arrived and like me, were starting to wonder if the panel was really going to happen. Eventually, it’s decided that the speakers are not going to arrive anytime soon. So the fans decide to take the show into their own hands and open up the discussion to the audience. With nary a hitch, the panel converted into an open forum, which allowed great audience interaction and diverse sharing of opinions and experiences. One of the speakers praised the independent podcast’s as having “low entry barriers”, which would allow anyone to share their “[stories] with no executive meddling”. Another mentioned how gaming, media, and podcasts allowed them to “escape and live [their] best life”. It was a decidedly heartwarming experience that showed a true passion for the subject and easy adaptability to what could have been a disappointing event.

The next panel is hosted by Stan Rezaee from 8Bit/Digi where he showcased to an eager audience different strategies for new independent game developers to use to market their projects. I’m pleased to see people asking and answering questions and many walk away with good, solid advice to fuel their ambition. By this time, it’s nearing 5:00pm and the rain still hasn’t let up. With a little bit of determination, and quite a bit of people dodging, I head out of the warm, welcoming convention and back to my car for the drive back home. It’s been a long day with little time to pause and reflect between events, and still so much more to see and do but I leave regardless, with as much excitement as I had when I arrived. 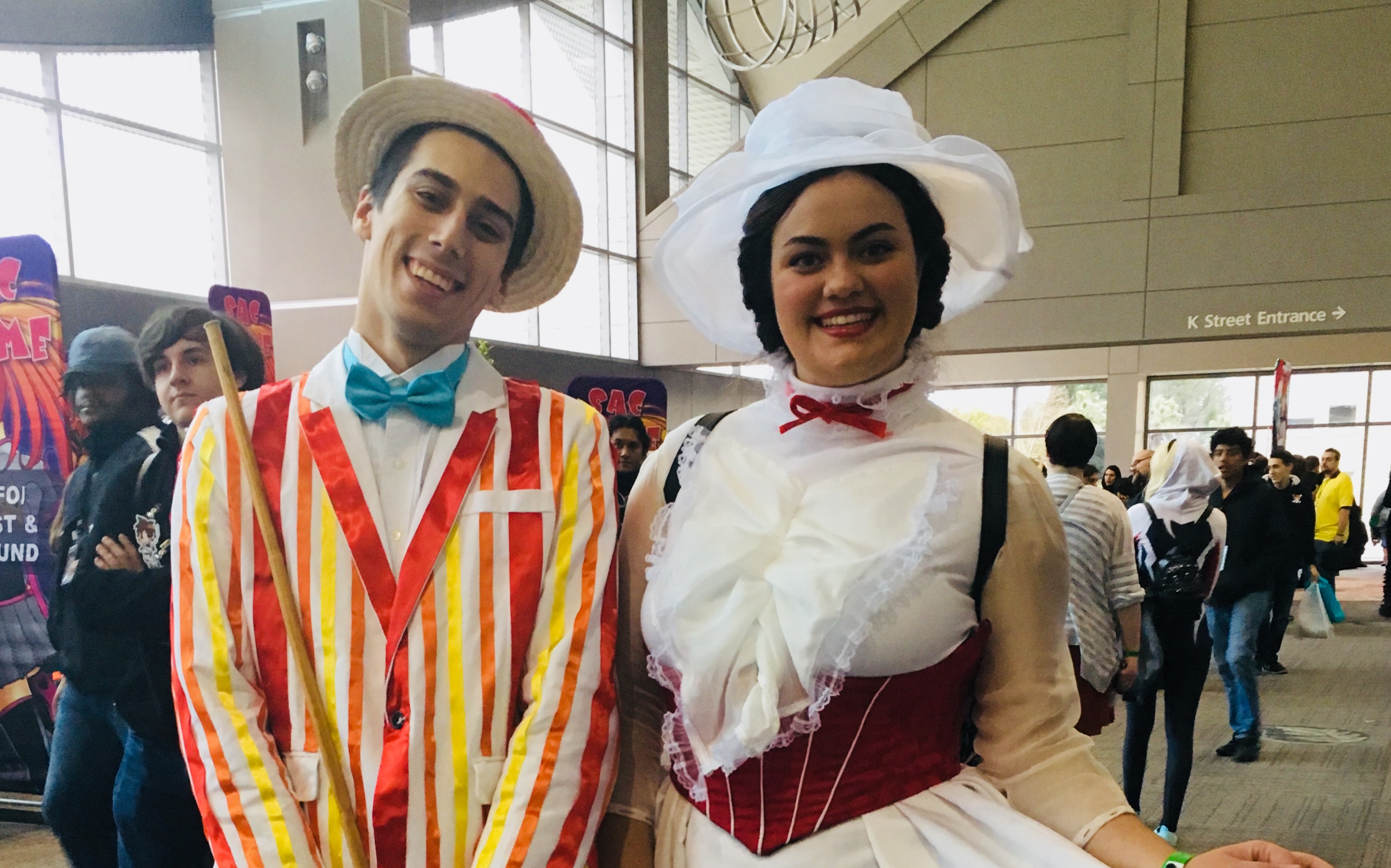 Season 4 of My Hero Academia will Premier...

Demoing the Oculus Rift S and Quest at...

Kyle Hebert will be at SacAnime Summer 2019