TemTem is off-brand Pokémon for people who want to enjoy Pokémon nostalgia without actually playing a Pokémon game.

Firstly, a disclaimer, TemTem is currently in early access with development still very much in progress. My criticisms may well be tidied up soon so don’t take them to seriously.

Secondly, a bit of context, TemTem came out of a Kickstarter campaign. I know basically nothing about this campaign. I’m aware it exists but I did not back it and have not read into it – I wanted to experience the game with fresh eyes and no other expectations.

On to talking about the game:

TemTem feels a lot like playing Pokémon Blue for the first time again, just with much better graphics and some tweaked mechanics. I mean this in the best way. The joy of finding new TemTem, exploring the map, not knowing when your TemTem will level up – it’s all there. One key difference right now is that all battles are two TemTem at a time instead of one. You also have a TemTem following you around as you travel, but so far as I can tell there is no benefit other than showing off. Seeing other people’s companion has led me to hunting down a few specific TemTem, so I would say it’s working.

The battles so far have been reasonably balanced and complicated enough to be interesting. I’ve lost a few times but not a frustrating amount, and always had some idea of how to improve.

The most recent Pokémon game I played was of course good, but frankly they’ve added so many layers to Pokémon games that I find them bothersome, and I ended up just ignoring a lot of content. TemTem is much more of a back to basics monster collection game and that’s what I’ve enjoyed about it.

That’s not to say there are no problems. The map is not useless but it’s it not great. Quest management has been an issue as I have now accumulated more quests than can appear on screen and I can’t seem to see the rest, leaving me to only progress in the quests at the top of the list. However, as I said before, the game is in early access and all of this is likely on the developer’s list of things to improve and fix asap. Plenty of people have still made considerable progress despite these issues, so it can be done.

One other major aspect of the game is the fact that it’s an MMO. You’d think I would have mentioned that sooner but thus far, it has not been much of a factor in my play through. I can see other people running around playing but the chat, clubs and friends lists don’t seem to be functioning quite yet. I have added people as friends and have been added but can’t seem to accept. Clubs, which I assume is TemTem’s equivalent of Guilds, is still grayed out completely. However, I think this was a really smart choice of priority by the developers. They’ve created lots of content, quests, areas and TemTem to catch – giving people plenty to do – and chosen to wait on some of the more social aspects of the game. What good would a chat system be if there were no TemTem to catch, right?

Overall it’s a fun trip down memory lane. We shall see how TemTem develops, whether it continues to embrace the shadow of Pokémon or becomes something independent. 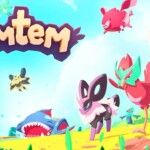