Heaven’s Vault, from Inkle Studios (the folks who brought you Pendragon), is a creative, innovative, and ambitious game—perhaps too ambitious. It aimed beyond the stars and ran out of fuel halfway up. But while weighed down by its ambition some not-insignificant flaws that hold it back from indie legendary status, it is nevertheless a fun, compelling, and delightful experience that is very different than anything else out there.

So… What Is Heaven’s Vault? 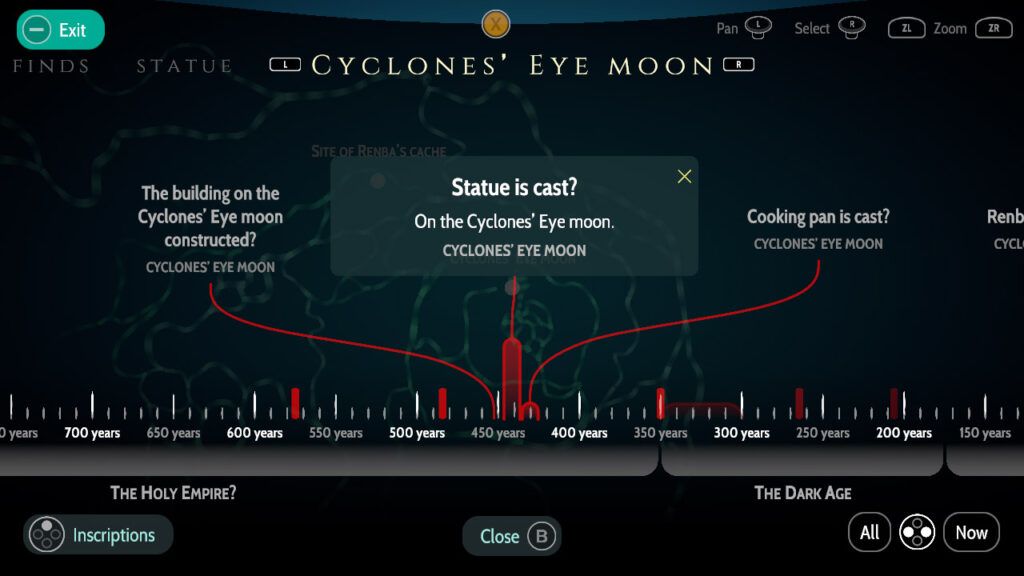 The closest way to describe Heaven’s Vault in conventional terms is as a quasi-sci-fi adventure game about archaeology—but “real” archaeology, not the Indiana Jones/Lara Croft/Nathan Drake-style archaeology more commonly seen in pop culture. However, this description doesn’t do it justice, and doesn’t capture most of what makes the game so alluring. Because it’s also a game about linguistics, history, robotics, time, and a strange cosmos’ strange cosmology.

I swear, it’s much more fun than I’m making it sound. It’s hard to convey the appeal of games this unique and different. But rest assured, Heaven’s Vault is a beautiful game with unique mechanics, an immersive and haunting atmosphere, high replayability, and a story with genuine mystery and intrigue—while straddling the line between an adventure game and a choose-your-own-adventure visual novel.

In Heaven’s Vault, you play an archaeologist named Aliya Elasra, who gets sent with her well-meaning but incredibly annoying robot sidekick, Six, to look for a fellow scholar who’s gone missing. Along the way, Aliya and Six will soar off to distant worlds within their home “Nebula,” explore crumbling ruins, decipher messages written in ancient glyphs, and uncover terrifying truths about the universe’s fate. A pretty tall order, even more so because nobody in this game seems entirely trustworthy.

Talk Ancient To Me 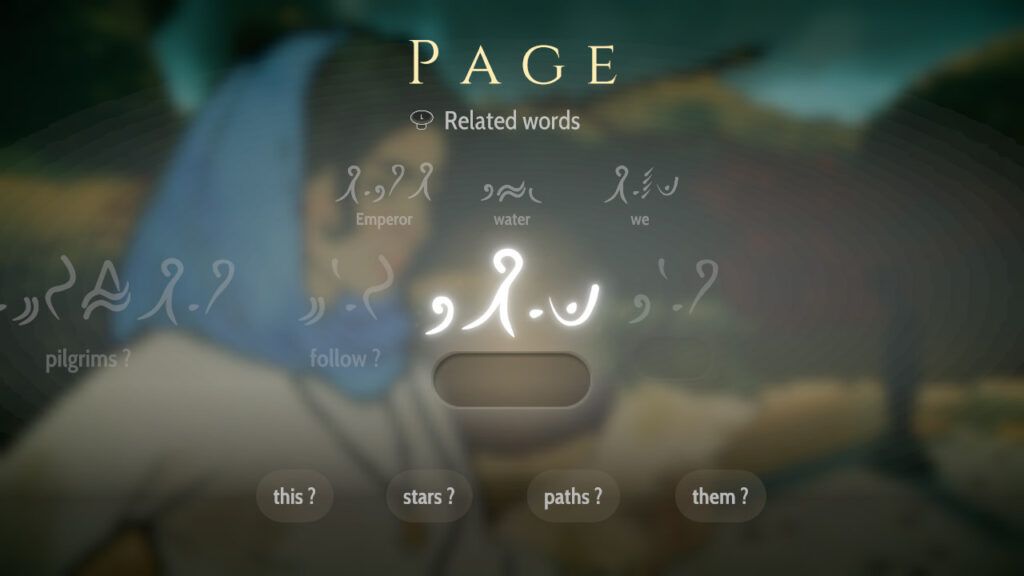 The game’s most significant innovation is its translation mechanic. As you investigate ruins and uncover artifacts, you’ll find messages on books, scrolls, walls, statues, plaques, tiles, and random stones written in an ancient, long-lost language.

Translating these messages, glyph by glyph, provides a considerable amount of exposition necessary to figure out what the heck is going on—and sometimes, even to advance the plot. The folks at Inkle actually built an entire, fully-functional language from scratch, just for the game. The result, besides just being impressive, lays the foundation on which the devs built the game.

Because this is a “real” language (called “Ancient” in-game), you can use the logic of grammar to deduce the meanings of new words, allowing you to translate progressively more complex sentences as you become increasingly familiar with the glyphs and their combinations. As you decipher these messages, you start to piece together a timeline spanning thousands of years through the rise and fall of forgotten empires, culminating in the present—the very moment you are playing the game. It even records your actions minute-by-minute.

Notably, real-life archaeologists and linguists have praised the game for its accuracy in portraying the two disciplines and how people practice them. And while there’s obviously a huge difference between actually practicing archaeology and playing a game about it, it’s nevertheless immensely satisfying to LARP as a scholar, discovering and assembling living histories from the breadcrumbs of forgotten civilizations.

A World As Unique As Its Game 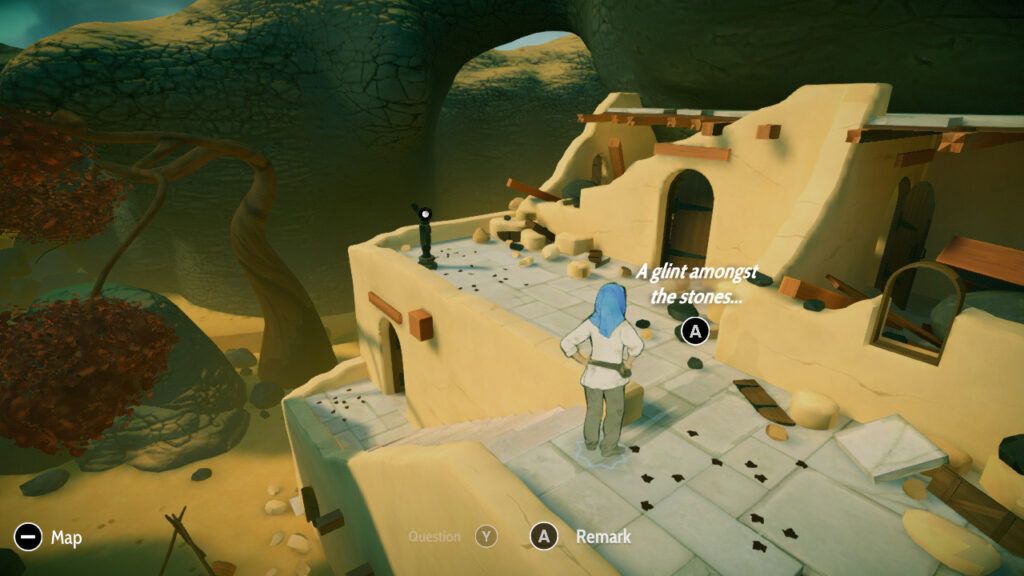 It helps that the game’s world is so well-built and presented. The graphics (except the beautifully hand-drawn character sprites) lean on the simple side and might skew a bit too low-poly for some gamers’ tastes. Nevertheless, the game’s locations consistently manage to evoke awe, wonder, mystery, and even sorrow.

In a true testament to Heaven’s Vault‘s atmosphere, the devs excel at squeezing as much atmosphere as possible from the game’s frugal graphics. Visiting new locations and learning more about the different worlds and their history is always intriguing. One can’t help but enter a new ruin feeling a profound reverence for those who once roamed their empty halls.

Reinforcing this sense of awe and appreciation is the game’s somber, slow, string-heavy, and highly evocative score. Heaven’s Vault‘s music conjures a melancholic, sorrowful, and sometimes gloomy atmosphere that injects Aliya’s quest with real gravitas. The music echoes a realm bearing the hidden scars of a violent past and bracing itself for an uncertain, turbulent future. 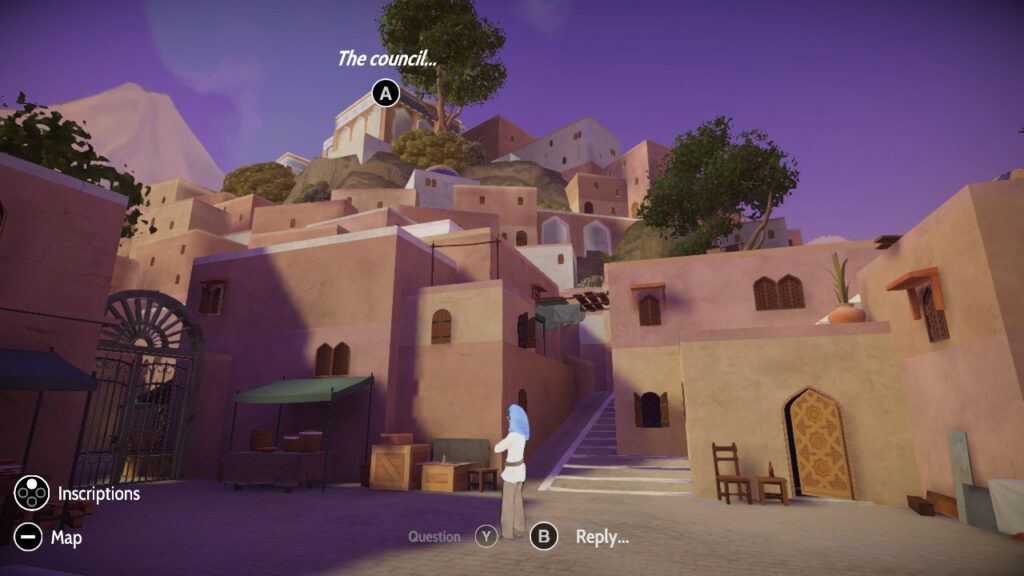 Additionally, the game gives you a surprising amount of leeway and autonomy to play the game as you please. While the overarching story mostly remains the same regardless of what you do, several characters have story arcs that resolve differently (provided they resolve at all) depending on your actions. Your character’s personality can also, based on your choices, run the gamut from well-meaning but overly blunt scholar to feckless jerk—which also plays out in how she treats Six, and how the different NPCs respond to you.

It is also doubtful you’ll solve all of Heaven’s Vault‘s mysteries on your first playthrough. Fortunately, you can start a New Game+ almost right away, and you even get to remember all the glyphs you’ve learned (this is even canonically justified, and rather neatly).

In fact, the game provides such freedom that speedrunners are already trying to plough through “clueless” runs, where Aliya gets through the story while talking, investigating, learning, and otherwise engaging with NPCs or her surroundings as little as possible. 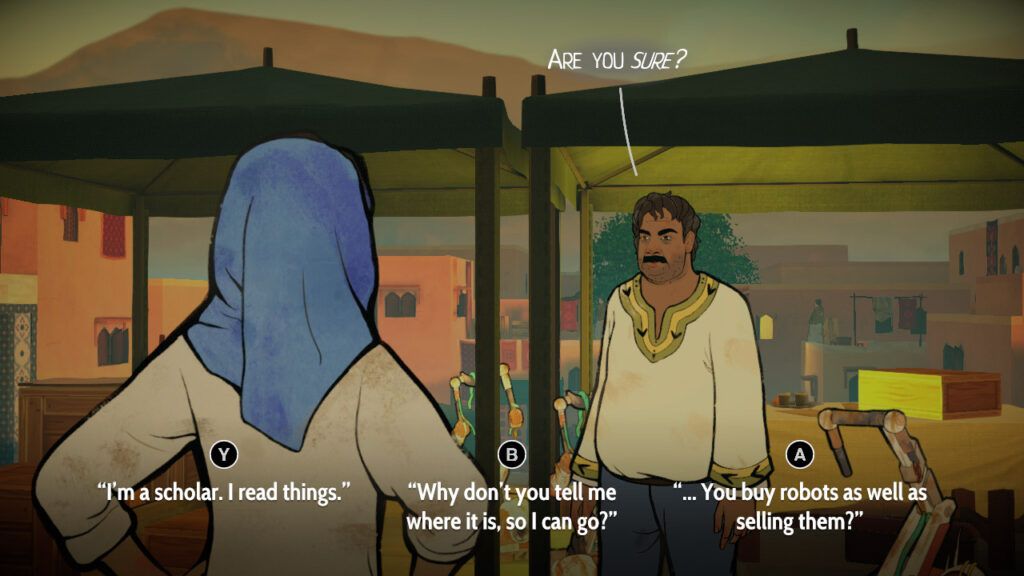 As fun and unique as it is, Heaven’s Vault unfortunately has some rather glaring flaws that drag it down. (Full disclosure: I’m playing the Switch version, so these issues may or may not be present on other platforms.)

First, Heaven’s Vault suffers from noticeable performance issues. The game tends to sputter when the screen is busy, or you’re translating a particularly long sentence. On one occasion, the game even crashed on me—but I must stress that this only happened once. The animation is also rough around the edges, and while this might partly be a stylistic choice, the framerate drops suggest a need to optimize the game further.

Then there’s navigating the Nebula. Traveling to another location involves steering your vehicle down rapidly-flowing space “rivers” to your destination. This is essentially another take on Kingdom Hearts‘ Gummi Ship sequences, only without baddies to shoot at and somehow even more annoying. Fast travel is also finicky and doesn’t always work correctly, so as a result, you’ll likely spend more time than you’d like manually traversing between worlds.

The camera also tends to bug out at the worst possible moments, which is par for the course for most 3D games but still annoying. And the score—while beautiful—can start sounding repetitive, particularly during long navigation sequences. I get that the melancholy is thematically appropriate, but occasionally rotating in a slightly more upbeat track—or one with instruments besides pianos and cellos—would help keep the music from wearing thin. 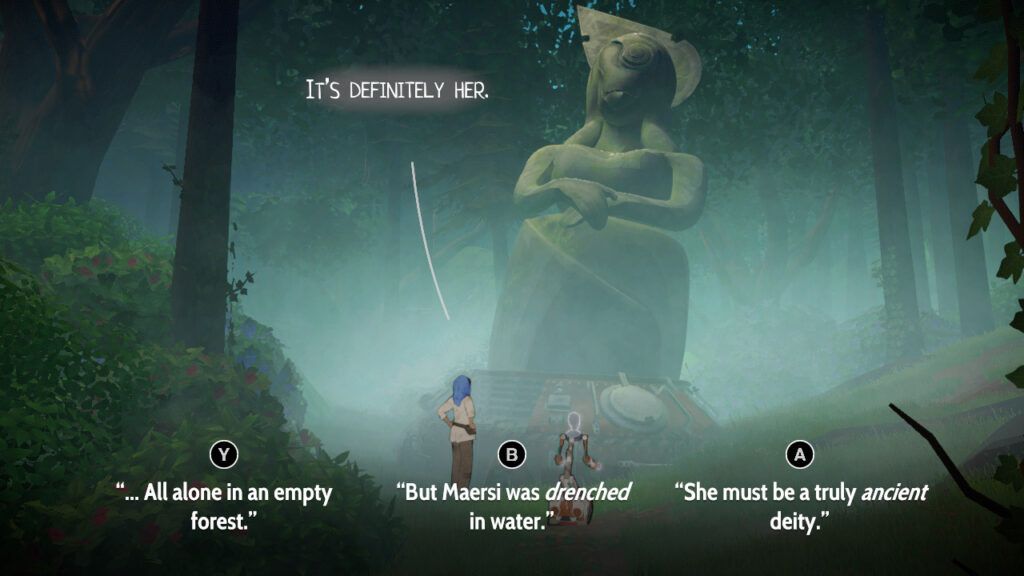 Finally, there’s your robot companion, Six. He straight-up sucks. Imagine a character with C-3PO’s whining (but none of the comedy), Navi’s constant nagging, a KGB agent’s nosiness, and Fredo Corleone’s sense of loyalty. Oh, and this character looks like an abominable lovechild of Mr. Clean and a forklift (who never quite made it), is capable of actually, meaningfully interfering with your tasks (and won’t hesitate to do so), and possesses the social graces of your average playground snitch. That’s Six in a nutshell.

To perfectly illustrate how much Six sucks, consider an optional sequence where you can replace Six’s personality. The replacement personality is curt, condescending, critical, bossy, and openly contemptuous of Aliya. Six’s default personality is so annoying I considered this change to be an improvement.

There are a few precious moments where you can get away from this insufferable pile of sentient scrap metal, and as soon as he’s out of sight, a relieving and liberating sense of serenity envelops your soul. Unfortunately, this wondrous feeling never lasts long, as the bothersome buzzkill invariably figures out a way to quickly catch up to you. There is an optional sequence where you can ditch Six for pretty much as long as you want… until you realize the plot demands you go back to fetch him.

Despite these flaws, Heaven’s Vault remains an admirably bold and mostly successful attempt at creating a different kind of game. It will provide a particular class of gamer with a thoroughly unique, meaty, and engaging experience with its profound lore, replayability, translation mechanic, and the chance to step into an experience unlike any seen in gaming so far.

Gamers who enjoy adventure games, graphic novels, or choose-your-own-adventure games—as well as gamers who want something different or have even a passing interest in linguistics or archaeology—owe it to themselves to check out this game.

This game was reviewed using the author’s purchased copy.