Pendragon is a game about lethal conflict between King Arthur and his son Mordred. Gameplay unfolds as a series of distinct runs: you play by starting from your choice of a variety of characters from the Arthur legends, like Lancelot and Guinevere. During each run, you play through a series of turn-based tile-based strategic encounters, gaining more and more followers, while characters dialogue with each other.

The idea of tile-based games recalls board games like chess and tafl, so this was a suitable choice given the game’s Celtic setting and the Celt’s love of board games. The game’s art also has a distinct time-period look to it, recalling stained glass from early Medieval churches. 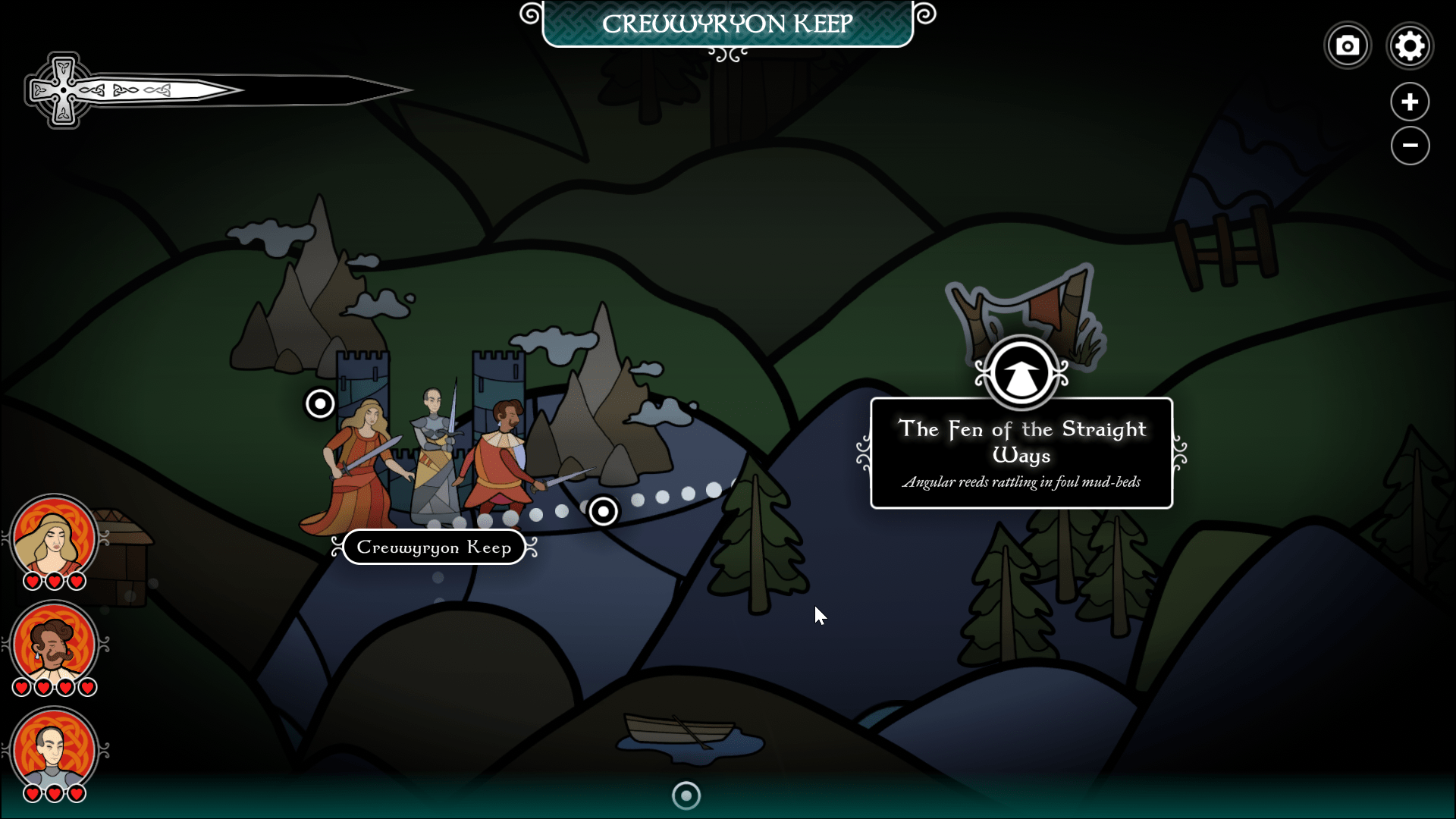 A map of the game’s overworld.

Pendragon is made by inkle, known for their other narrative-heavy games, like Heaven’s Vault and 80 Days. Heaven’s Vault is an amazing game in which you play as an archaeologist uncovering the past by analyzing artifacts and translating ancient script. As a player, over time you learn an actual, readable, glyph-based writing system to discover information about the culture and history of your ancestors.

As a huge fan of Heaven’s Vault, I was excited for inkle’s next game. The idea of a tile-based strategy game with an evolving narrative was interesting, and I had a lot of hope for another great game. I was mildly disappointed.

The main problem with Pendragon is that the narrative wasn’t interesting enough to warrant the structure of repeated runs. Most of the dialogue during encounters felt like filler and got repetitive with each new run. While at first the game was interesting, it got old fast for a game built around replayability.

Even playing with different characters didn’t seem to change much about the game. Despite reaching the end of the game and finding Arthur and killing Mordred several times, nothing much about my runs was all that different from the others, especially the ending.

At times, the game is difficult, but the difficulty feels fabricated. Often, I felt that I was simply shuffling my characters around on the map without any clear way forward. Make one bad move and a character can be taken off the board for the rest of the encounter. If a character is taken off the board and you flee the battle, they are gone until the next run (in most situations). So, it wasn’t often a viable tactic to play sacrificially, leaving your progress halted.

One interesting part of the tile-based gameplay was the concept of “stances.” You can take a turn to change stances between “scouting” and “combat.” In combat stance, you can move horizontally and are able to attack enemies that you move into. While scouting, you move diagonally and cannot attack, but you claim adjacent territory as you move (making it harder for the enemy to attack you). 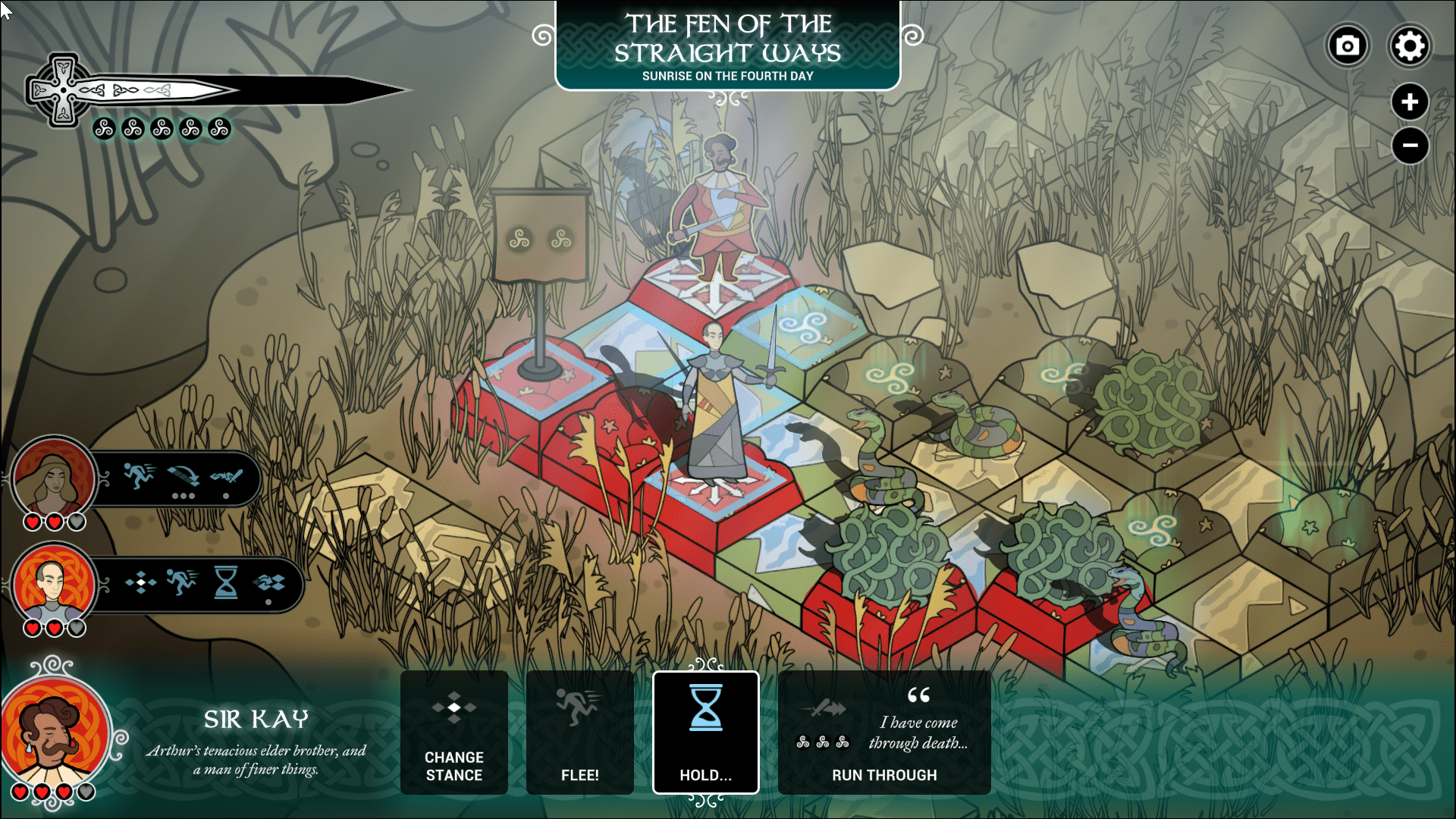 One of the game’s boards. The goal is to get to the far side.

This game’s marketing emphasized its narrative, but there were a lot of dialogue issues. Dialogue-triggers seemed broken and at times characters spoke without a sense of context.

Once, at the beginning of a playthrough with Lady Rhiannon, I encountered a couple of wolves in battle. Rhiannon’s choice words in this situation were, “I’ll cut his chest while he’s staring at my breasts” and “I’ll slit his throat while he’s fumbling with his sword.” Not bad bits of dialogue, but obviously they don’t make sense in context.

There were numerous situations like these: awkward and buggy dialogue lines and non-sequiturs. They were frequent, occurring multiple times on each playthrough. Once, a companion character began discussing travel plans in the middle of a tense battle. Inkle games are known for having massive amounts of dialogue, so that these problems occurred makes sense, but I never encountered nearly so many awkwardly placed lines in Heaven’s Vault.

One of the best things about the game were its campfire stories. When your party makes camp for the night, one of the characters might offer to tell a story. inkle gave a public call for submissions and select 23 stories from over 400 submissions.

Overall, the ideas of this game are quite promising, though disappointing in execution. If you’re a fan of inkle, I’d recommend you still give the game a try, despite my less-than-stellar review. It’s possible that the game just wasn’t my cup of tea. And if you’ve never heard of Inkle but you like narrative-driven games, I’d recommend you check out other games made by the studio. Especially Heaven’s Vault. (Play it, seriously.)

You can find Pendragon on PC. Heaven’s Vault is currently on PC and PS4, but it’s coming to Switch on January 28. Oh, and inkle is working on a new game that’s set in the Scottish Highlands. Follow its progress on their blog here. 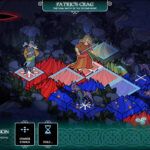 I expected a lot out of inkle after playing Heaven's Vault, but I was a bit disappointed.

Disclaimer: The game used for this review was provided by inkle.

Metagame Review: A deeply problematic retelling of Melee’s “era of the five gods”