Review | The World Next Door (PC/Mac)

Rose City Games and Viz Media’s The World Next Door is an “action-adventure” game, in which the player control Jun, a human girl trapped on Emrys, a magical parallel world. With her group of friends, they delve into magical dungeons-like areas called Shrines to quickly find a way to re-open the portal between worlds.

One of the things that intrigued me about The World Next Door was its charming setting. There is a distinct style to the animations, characters and world design, reminiscent of a graphic novel or anime. In fact, I could easily see this as an animated series, or even a series of comics (similar to the prequel of the game). There’s a fun mix of serious plot points (Jun is stuck in the magic world, the Grievances, etc…), with the more light-hearted setting and spunky characters. So while the story does drive the player forward, with reminders that Jun is in fact, not supposed to be there, there’s an underlying sense of optimism and youthful determination that makes the game a pleasant experience. 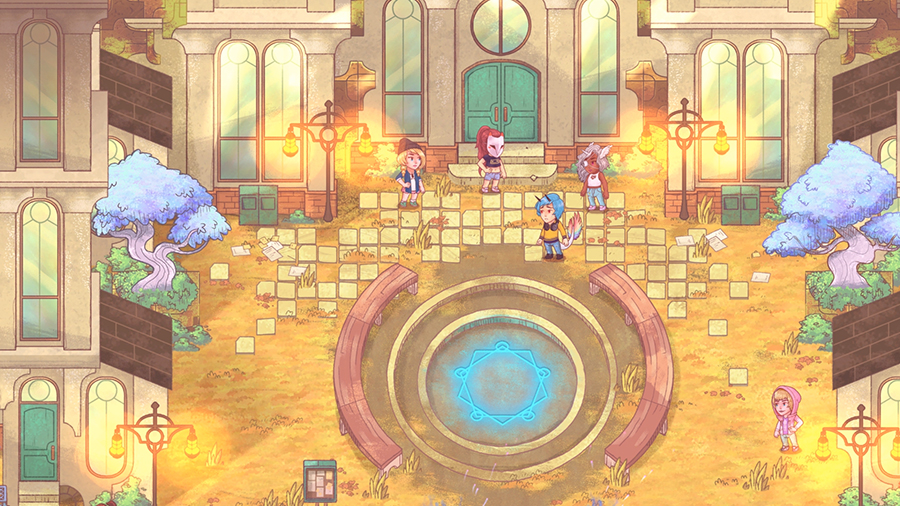 There are five main explorable areas: The Courtyard, the Training Yard, the Tram Station, the Public Market, and the Portal. Then throughout the game, you and your group of friends explore the Five Shrines, which contain puzzles, strange monsters, and magical artifacts to collect.

This being a magical world there’s a lot fun to be had with character design. Everyone Jun meets is interesting in some way. There are also many neat details peppered throughout that add some immersive touches to your experience. For example, the ‘menu’ is Jun’s iPhone, complete with a cracked screen. You can send texts to your friends, and their responses are hilarious to read. There are different bulletin boards that have different tips and information, which changes every in-game day. All of this is presented consistently within the game’s tone and style. 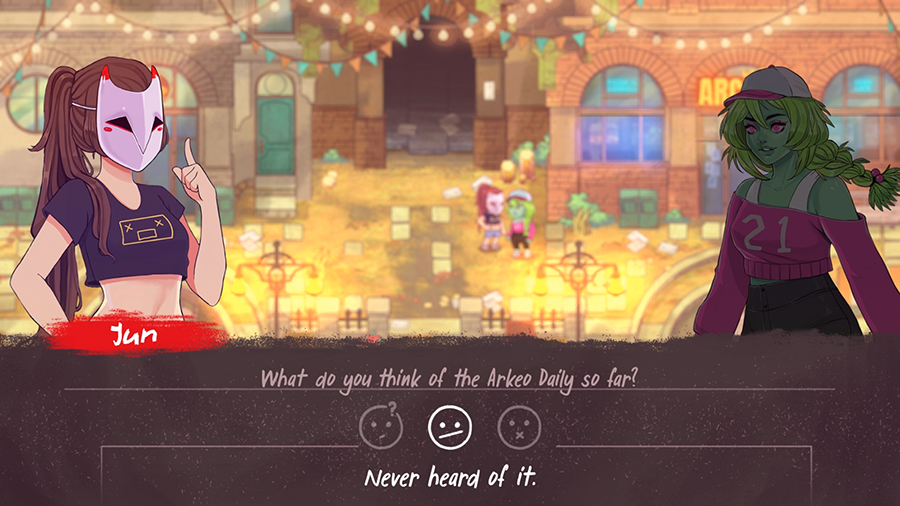 Between story beats, the game allows you to poke around the world you find yourself in and interact with many of its unique denizens. Some will give you simple fetch quests and flavor dialogue to encourage the player to explore and to flesh out little tidbits of the lore. It’s a nice change of pace, a breath of fresh air if you will, from the Shrine dungeon delving. Between cults and mysterious monsters, it’s nice to figure out the origins of a love letter, or find a lucky ball cap. If Viz Media decides to expand on The World Next Door, it’d be entertaining to explore beyond Arkeo and the Shrines to see more of what Emrys has to offer. 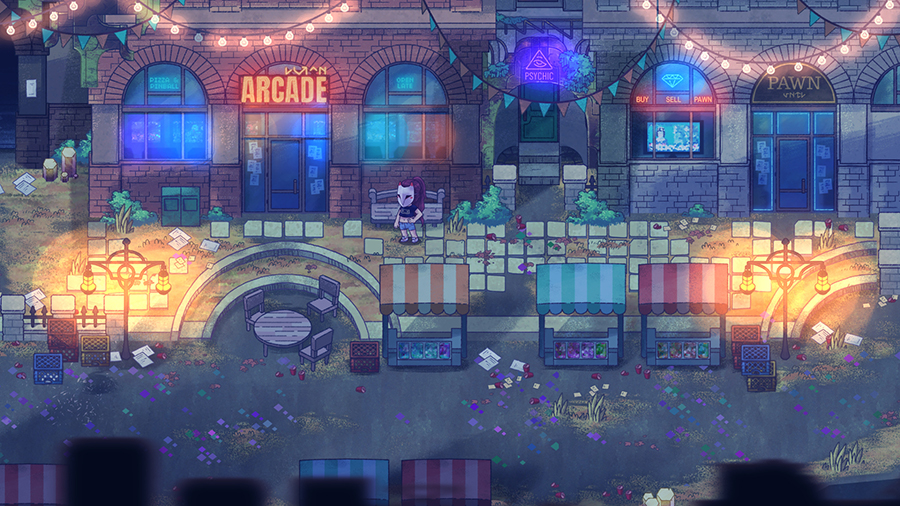 DRAW MAGIC FROM THE EARTH

As mentioned before, Emrys is a magical world. Therefore, it makes sense that much of Emrys’ and the game’s mechanics are based around the arcane. Viz Media took a different approach to combat then I had excepted. But despite the challenges it was a lot of fun to figure out. According to Liza, Jun’s best Emrysian friend, magic comes from Emrys’ core. In the game this manifests itself as runes in the combat or puzzle zone. You need at least three runes to activate a spell and the more you ‘tether’ on, the more powerful the effect. You can cast fire, lightning, void, slashing and healing spells during fights.

The puzzle-based combat is a unique approach to magic slinging and it does require some more strategic thinking than just mashing keys. For example, instead of immediately activating the three runes needed to charge a spell I could tether and move extra runes of the same type to get a more powerful effect. Or I can place a lightning rune to slow my opponent before gaining some distance to grab some healing. 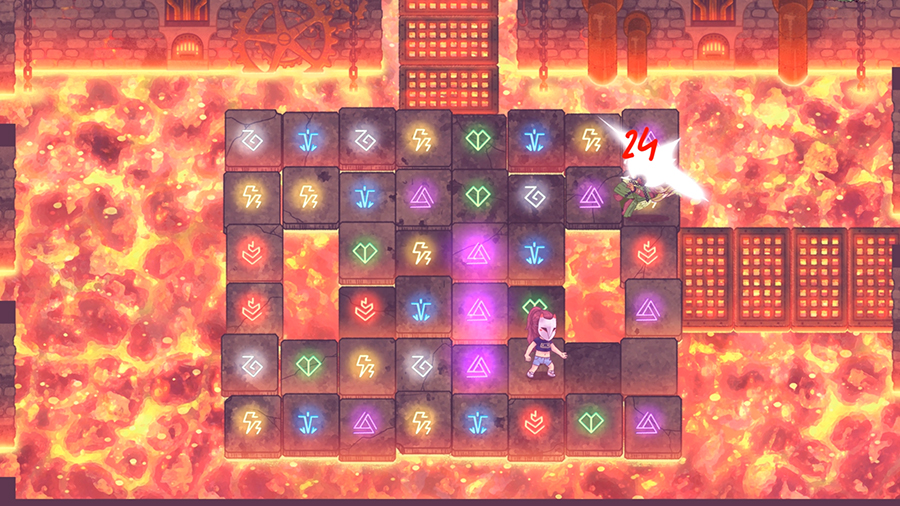 SOME PATIENCE IS REQUIRED

The writers and designers of The World Next Door did an excellent job at making the world and characters interesting. I’m curious to explore every nook and cranny of Arkeo, and happy to chat with every NPC Jun meets. I also want to unlock the story and mystery that I come across as I play through the game. How does Jun get home? Who is this mysterious character that keeps hinting at some bigger events going on behind the scenes? But in order to reach that point I need to fight through the four magical Shrines and solve the puzzles within. Which after the third shrine, gets a little tedious.

However, after a while the combat becomes a little repetitive, especially with some of the clunkiness from the movement and activation systems have. In some of the later levels, the combat zone becomes narrower (some of the paths becoming a single tile) and with there being 2-3 opponents swarming on you for melee attacks or flinging giant balls of magic, your dashing and dodging skills become important. But I often found myself frustrated when for the umpteenth time Jun got stuck on seemingly nothing (most likely the corner of a tile). I’m frantically running around that combat zone, dashing for that crucial healing only to be stopped by a sharp turn. In addition, while the combat is cool and different Jun needs to be precisely placed in order to activate the runes. I’d find myself running to a group of runes only for nothing to happen. Usually, I would just need to move a fraction of an inch to re-engage the rune but in the midst of combat this can seriously slow combat down. 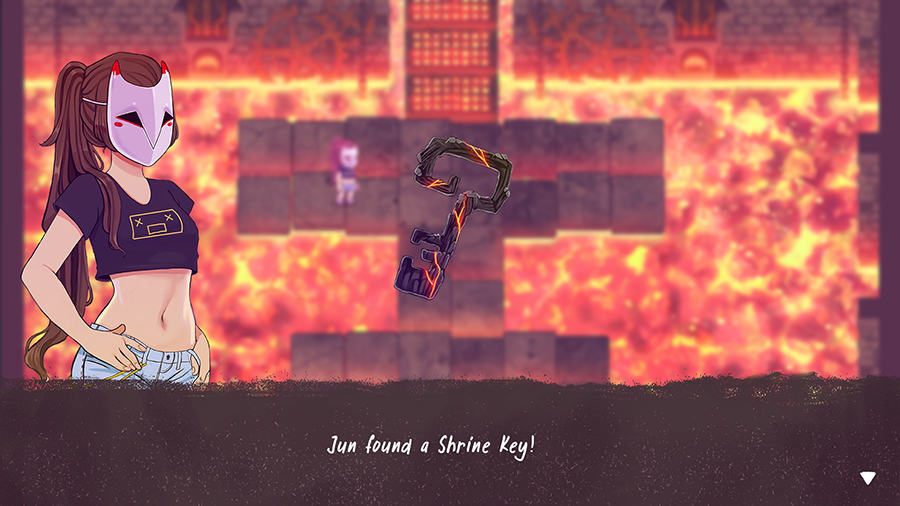 Overall, The World Next Door is a fun and interesting game from Viz Media and Rose City Games. The characters and setting are unique and spunky, the story is compelling, and I was always curious what new mystery the next story beat would bring. The magic combat is a clever blend of puzzle solving and traditional fighting. I’m eager to learn more about Emrys, it’s people, and even TWND’s Earth. It is worth noting that this is Viz Media’s first game. Some of the mechanics, especially during combat, felt a little rough and after a point some gameplay aspects felt repetitive. Much of my interest stemmed from my desire to know more of the story and setting, and as such it would be interesting to for the Shrines, for example, to have as much detail as the core areas. Or simply more to do between group expeditions into said Shrines. If you’re a fan of anime or graphic novels, this is definitely a game to check out. 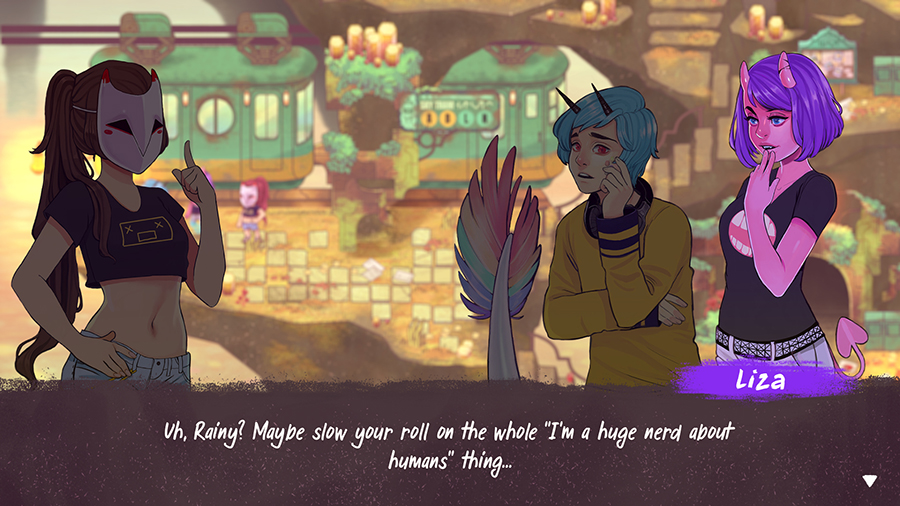 Disclaimer: Viz Media provided me with the game code for review purposes.

The World Next Door 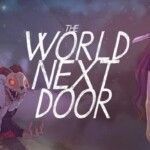